Suppose you’re a beginner at fishkeeping and aquariums. If that’s the case, you need beginner-friendly fish. Not all fish are easy to take care of, and many require a lot of space. However, the tetra fish is one of the most popular fish, especially for beginners and freshwater aquariums.

Tetras are small and inexpensive fish that are easy to care for and don’t take up much space. With that being said, there are dozens of tetra types that you can find, and each is different from the other. First, let’s take a look at the most popular types of tetras.

The ember tetra might not be one of the most well-known or popular species, but it is one of the better-looking ones. This is a fish that is found mainly in central Brazil.

As you can probably tell by its name, this tetra is orange in color or almost red. It’s a good-looking fish that contrasts nicely with your aquarium’s greenery.

As for care, this is a fantastic fish for beginners. They do well in moderate tropical water conditions, and they aren’t hard to care for either. However, they aren’t picky fish.

These tetras will create large schools if you get a lot of them together. However, they measure about 1 inch in length, and you will need a 10-gallon tank to accommodate a few of them.

This is not a brightly colored fish, and as the name implies, it’s black and silver. They might look quite intimidating, but they’re actually peaceful and friendly fish.

They’re community fish that like living in groups of five or six. These are some of the largest tetras as they measure about 3 inches in length. To keep five of them together, you’ll need a tank of about 20 gallons. It’s a perfectly beginner-friendly fish.

This type of Tetra fish looks similar to the ember tetra, but instead of having red and orange fins, it has black-tipped fins. This produces color contrast, especially with the right background.

This is also a fairly large tetra in terms of size, as it measures 1.75 inches. Therefore, you will need at least a 10-gallon tank to keep a few of them together. Remember, this is a schooling fish, so you should keep about five of them together.

Moreover, these fish are relatively easy to take care of, although they aren’t quite as beginner-friendly as the ember or black skirt tetras that we previously discussed. They require pretty specific water conditions, making them a little harder to take care of than others.

Probably the most recognizable of all tetras is the neon tetra fish. This is easily one of the most identifiable species due to its vibrant coloration. These fish have a body of various hues of blue and green, along with a very bright red stripe along the second half of the body.

This fish can be found worldwide, and it’s a tetra that is exceptionally beginner-friendly. Neon tetras measure about 1.5 inches long, and you’ll need at least a 20-gallon tank to keep a few of them together as they like to be in schools.

The Congo tetra is at the top of the list of the most beautiful types of tetras. This fish features an amazing coloration that features iridescent blue, violet, gold, and bright orange. It’s a very noble-looking fish that really stands out in any aquarium.

This is by far one of the largest tetras, as they can grow to around 3.5 inches. These are schooling fish, and you should keep about five or six of them together, which will require a 30-gallon tank.

These are peaceful fish that work well in a community setting. Just be aware that they like to nip on leaves and are voracious eaters, so they’re not the most beginner-friendly of fish.

The rummy nose tetra has a translucent body that you can somewhat see-through, along with a bright red face. This makes it one of the most unique looking of all the tetras.

However, they require relatively specific water conditions, so they’re not the easiest fish to care for.

With that said, they like to be in groups of six or seven, and they are peaceful schooling fish that work well in a community tank. However, they measure about 2.5 inches, and to keep a group of them together, you’ll need at least a 20-gallon tank.

As we said, there are too many types of tetras to cover here today. However, we created a list of the more common tetras you are most likely to find.

Now you know a little bit more about the various tetras, so you can choose those that suit you and your aquarium objectives. There are many to choose from, so take your time!

If you are setting up a large fish tank, a good aquarium filter is one of the most important things you need. In addition, you need a mechanical, biological, and chemical filter to keep your fish healthy and the water clean and clear.

With that being said, finding a good filtration unit for your aquarium, especially one that performs as advertised, is easier said than done. However, this is what we have found for you – an excellent filtration unit that will keep your water clean. 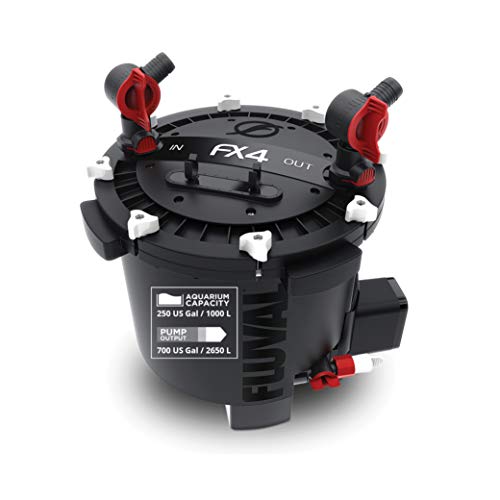 We will look at the Fluval FX4 High Performance Aquarium Filter, a very large and powerful external canister filter. It has an astounding flow rate, excellent filtration capabilities, and many convenience features. Based on the price, it has to be one of the best filtration systems for aquariums.

Who is This Product For?

The Fluval FX4 High Performance Aquarium Filter is for anyone who needs a large and powerful aquarium filter for a heavily stocked fish tank.

However, this unit is designed for freshwater use and should not be used for saltwater fish tanks.

This is a very large unit that can process up to 700 gallons of water per hour, and it comes with the three major types of filtration, making it ideal for the largest and the heaviest stocked tanks.

In the box, you’ll find a filter for a 250-gallon tank. It has the filtration media included, including mechanical, chemical, and biological. It also includes the metal clamps, flow clamps, an output nozzle, the intake, a small hose, and a large hose.

The Fluval FX4 High Performance Aquarium Filter has many features worth talking about, so let’s do that now. First, this is an external filter, which does not take up any space inside the tank. With that being said, this is a large filter that will take up space outside of the aquarium, so you will need a fairly large cabinet to house it. It’s also a very heavy filter, especially when it has water in it.

This unit is ideal for fish tanks up to 250 gallons in size, which is massive. Moreover, this unit can pump up to 700 gallons of water per hour.

This means that it can process a 250-gallon tank nearly three times per hour, which should be more than enough to keep any fish tank clean and clear. It also features an adjustable flow rate, so you can turn it up or down as needed.

The Fluval FX4 High Performance Aquarium Filter is self-starting, making it very user-friendly in general. Simply add a bit of water and turn it on; the pump will take over and do the rest for you.

There are special valves that are designed with a leak-proof Click-Fit attachment system. Moreover, these valves are positioned at 45 degree angles, which makes for easy installation and rotation. You also get multi-directional output nozzles that you can adjust to create the type of water flow you need for your aquarium.

This filter features a stackable media basket system that eliminates the need for a water bypass. Moreover, these media baskets are pretty large. This filter performs all three significant types of aquarium water filtration – mechanical, chemical, and biological. Furthermore, this product comes with all of the filter media included.

How to Use It

One thing you need to know is how to set up this filter. So we’ve included links to this video that has a step-by-step instructional on how to get it running. 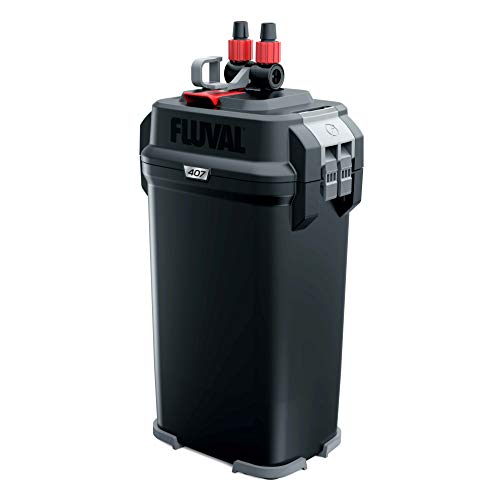 Suppose the aquarium filter we reviewed today is too big and heavy for you. If this is the case, there are other good options. For instance, the Fluval 07 Series Performance Canister Filter for Aquariums is a slightly smaller and more affordable model from this same brand. It performs really well, it works for pretty large tanks, yet it is not as massive as the FX4.

Overall, we think the Fluval FX4 High Performance Aquarium Filter is an excellent option to consider. It’s big, it’s powerful, and it gets the job done.